Why Goat Yoga is more than just a fad

The naysayers that predicted goat yoga would be a fad on par with pet rocks and mood rings have been more quiet after several years of goat yoga’s explosive growth, increasing popularity, and its use as a foundation of agritourism.

While the draw for family farmers and rural households to hold goat yoga events has been easy to understand, the continued expansion of the goat yoga market and increasing attendance numbers seems more difficult to explain.

Until, that is, one realizes three things.  First, over the last 50 years, the U.S., and much of the world, have become predominantly urban.  Second, the rates of depression and anxiety disorders can be up to 280% greater in urban households compared to rural. And finally, animal assisted therapy has been shown repeatedly to improve feelings of health and wellbeing.

These three things taken together make the success of goat yoga feel pre-ordained; Coming to the country to re-connect with stories great grandparents told about growing up on the farm, and leaving the hectic city life behind for a while is immensely satisfying; But why goats?  Isn’t one animal equivalent to another in the world of animal assisted therapy?  Why not dogs, or cats, or horses instead?

The best way to answer that is with one word: “Annie.”  Annie is a Pigmy goat, and she was the only goat kid born on No Regrets Farm.  As the only kid present in the months leading up to goat yoga’s formation, she provided the founder with a source of smiles and a sense of calm.

Still, why goats?  Goats were likely the first domesticated animals, and as such, there is a rich emotional and evolutionary overlap between goats and people.  Thus, it is no surprise to learn that Goats recognize human emotion, and the faces representing those emotions; Their survival depended on it.

Couple that with the fact that socialized goats rewarded with affection instead of food are nowhere near the insatiable mischief makers and eating machines depicted in cartoons or petting zoos.  Now package all that in an animal that can’t hurt you like a horse might accidentally do, a personality with a mix between cat and dog, and a hilarious sense of humor, and you can’t help but to bond with a goat.

And that leads us back to Annie; The bond Annie formed with goat yoga’s founder, arguably, put Lainey Morse in the right mindset, and brought her back to what was important in life.  No calm from Annie, and goat yoga never would have been. 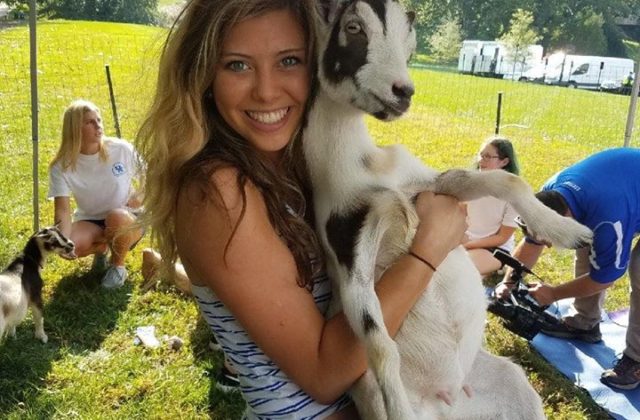 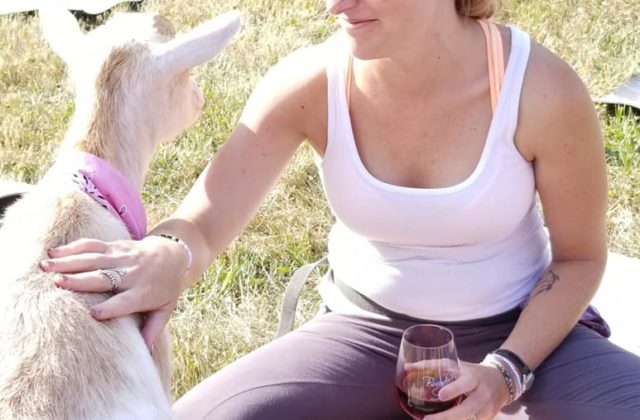 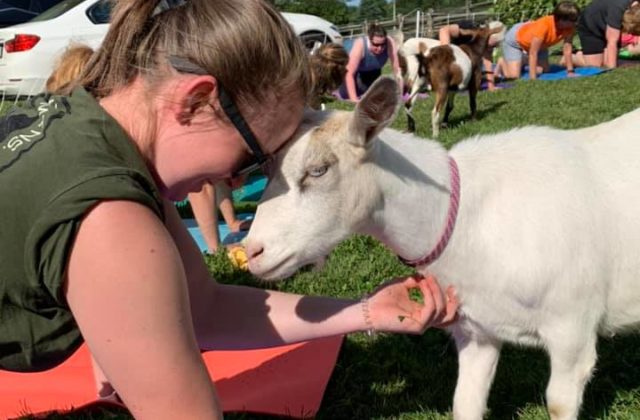 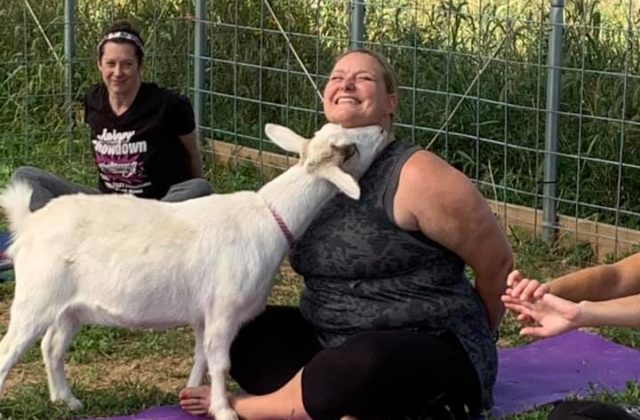 Find the location nearest you and join one of our nationwide classes!

We use cookies on our website to give you the most relevant experience by remembering your preferences and repeat visits. By clicking “Accept All”, you consent to the use of ALL the cookies. However, you may visit "Cookie Settings" to provide a controlled consent.
Cookie SettingsAccept All
Manage consent

This website uses cookies to improve your experience while you navigate through the website. Out of these, the cookies that are categorized as necessary are stored on your browser as they are essential for the working of basic functionalities of the website. We also use third-party cookies that help us analyze and understand how you use this website. These cookies will be stored in your browser only with your consent. You also have the option to opt-out of these cookies. But opting out of some of these cookies may affect your browsing experience.
Necessary Always Enabled
Necessary cookies are absolutely essential for the website to function properly. These cookies ensure basic functionalities and security features of the website, anonymously.
Functional
Functional cookies help to perform certain functionalities like sharing the content of the website on social media platforms, collect feedbacks, and other third-party features.
Performance
Performance cookies are used to understand and analyze the key performance indexes of the website which helps in delivering a better user experience for the visitors.
Analytics
Analytical cookies are used to understand how visitors interact with the website. These cookies help provide information on metrics the number of visitors, bounce rate, traffic source, etc.
Advertisement
Advertisement cookies are used to provide visitors with relevant ads and marketing campaigns. These cookies track visitors across websites and collect information to provide customized ads.
Others
Other uncategorized cookies are those that are being analyzed and have not been classified into a category as yet.
SAVE & ACCEPT